The Editor is always the highest propriety and will override any values from controllers until they are released or The Editor is reset.

Assigning Controllers to priority Groups: 1. Tap the top area of a controller display, the Settings pop-up will open. 2. Select the {Controller Settings} Tab. Controllers are used to playback or execute a number of objects:

Controllers are numbered from right to left to facilitate continuous numbering with physical and virtual controller wings. The A/B is only linked to the Master Controller if the [SELECT] is assigned to A/B..

GOTO and LOAD are used to crossfade to cues out of sequence. By default, GOTO immediately transitions to the specified cue in the system GOTO Time. LOAD preloads controllers. The next [GO] will transition to the preloaded cue in Cue Time.

GOTO a cue on the Master Controller using a specified Time:

If a Qlist other than the one that is currently on the Master Controller is selected, that Qlist will replace the current one..

GOTO a cue NOT on the Master Controller:

Load Commands: Load a cue on the Master Controller - Method 1.

Load a cue on the Master Controller - Method 2.

LOAD a cue NOT on the Master Controller:

If a Qlist other than the one that is currently on the Controller is specified, that Qlist will replace the current one with the specified cue pending.

Controller buttons and sliders may be customized to allow maximum flexibility. When Qlists and Scenes are initially assigned to Controllers, the buttons are configured as per the System Settings defaults for Controller and Controller Action. Defaults are accessed by tapping the System Status area at the far right side of the controller display. 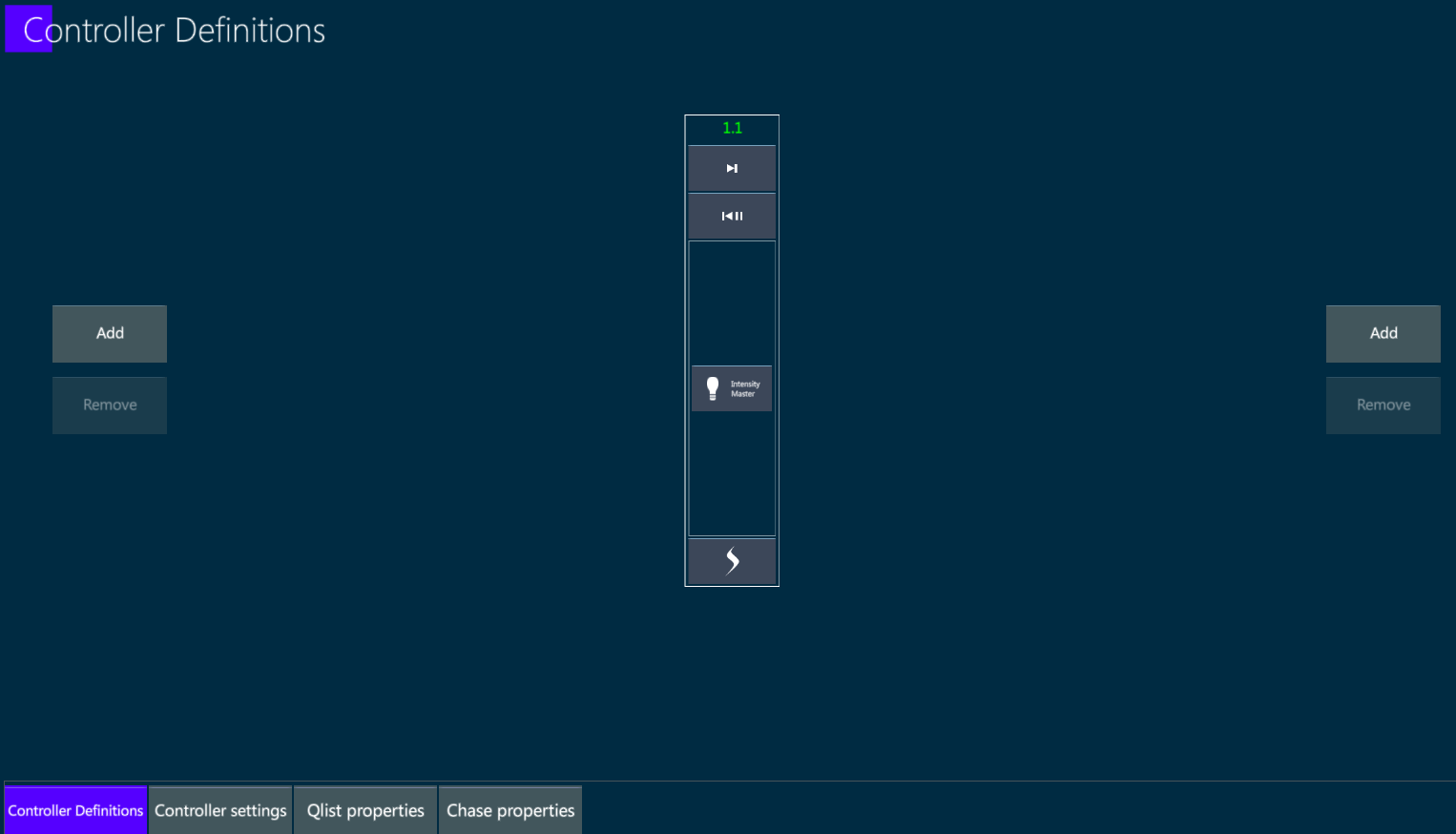 If a Qlist other than the one that is currently on the Master Controller is selected, that Qlist will replace the current one. Default settings for controllers assigned Qlists, Scenes, and Submasters may be set in the Defaults section of the System Settings Pop-up. See 7.5.1. Controller Settings.

If from a non-[Select] Controller: Control Keys: Provide “On the Fly” access to button functions not directly assigned to controllers. Apply a Controller Key:

In most cases, double press of the Control Keys locks them on until pressed again.

👉 Most useful when locked on with double press.

👉 Most useful when locked on with double press.

Assign a Qlist to a Controller:

Blank Qlists may be assigned to any controller.

Assign a range of Qlist:

Assign a Cue to a controller:

Off - Instantly turns off a controller

Release All - Turns off all controllers using release time.

Free - Unloads a controller. It does not delete the loaded object.

Free All - Unloads all controllers.

The Controller Mode keys are located at the far left of the console beside the motorized faders. The motorized faders may be assigned to any one of 4 modes. These modes allow for a quick modification to various rate and effect parameters. Controller modes are outside of the editor and are designed for “On the Fly” usage.

Controller Modes allow the following to be adjusted:

The Rate function allows users to adjust controller rates or effects parameters in “real time”. This is very helpful in fine tuning chases and effects to synchronize with music, or to improvise performances “on the fly”. The Rate Screen operates outside of the editor and is non destructive. Changes made in the Rate Screen may not be stored in cues but may be stored and recalled in [Snaps]. Freeze only effects chases and effects at the playback level. To permanently release an effect from a cue see: 13.3.1. Building Effects Using the Advanced Effects Editor

When actively in the Rate Screen, physical controller keys are mapped to the rate interface and may not be used to activate Qlists, cues, or scenes. As an alternative, the transport bar may be used. To use the transport bar:

A Playback Master is a controller that masters other controllers.

LED and theme color for the playback master object is blue.

Any key command on the master will be triggered on the controlled Playbacks (GO, BACK, etc.).

Any fader behavior movement becomes a master to the other sliders (rate, intensity, etc.).

Playback Masters can also be stored in snaps.

To Set Up a Master PB

Use the Move button to rearrange the controllers.

A controller can be moved to any other controller, even if it’s a different type.

The controller will be moved with all its settings and state, including intensity value etc.